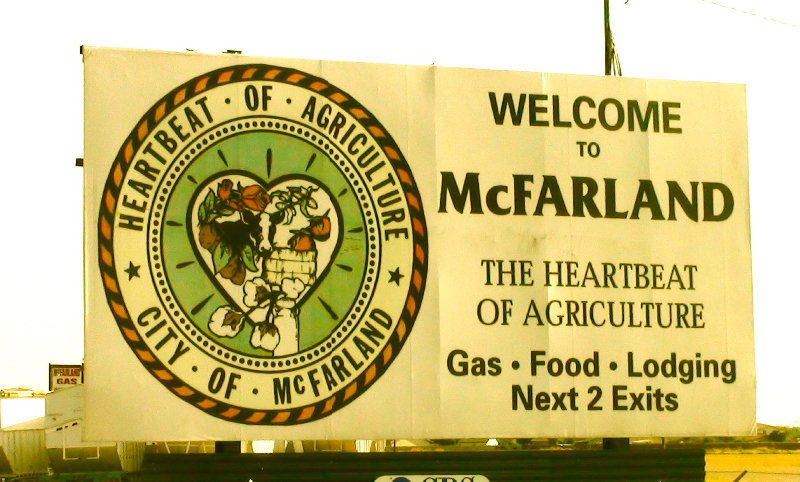 McFarland, California. A small town of about 13,010, located in Kern County, straddling the 99. McFarland is known for a Cancer Cluster in the mid 80’s, which took the lives of over a dozen children, and its Cross Country Team, which ought to tell you something. When the best sport is running, you can’t help but think these kids all have something to run from.

If you blink while driving by, you’ll miss it. But we needed gas, and didn’t want to run the risk of a low tank before hitting the Grapevine. We’d already done that on the way up. No need to live that twice.

We pulled off the freeway, onto a gravel road, tires kicking up dust. The station was a little ways up from a long since closed garage, with an old sign propped above that said “Tacos.” That’s it. Just “Tacos.” We drove by and a mangy, scraggled little terrier slipped under the chain link fence and into the junkyard lot, where mismatched odds and ends lay stacked across the graveyard of the earth.

I’d had to pee since the cotton started growing, about 20 miles back. We’d passed the almond hulling factory, the sugar beet ranch, and the citrus processing plant, finally stopping where potatoes baked deep down in the soil.

The station’s lot was lined with Mag Trucks. Sleeping drivers tucked away into their cabs, the roaring hum of engines making strange music in the stranger light of a hazy sunset.

“Don’t wander too far,” my boyfriend said. I chuckled, but he was right. There was an uncomfortable, electric energy here. A stark silence that crackled in the air. It was offputing, as small towns often are.

Buffet lines of Fried Chicken and other arterial enemies lined the walls. Camo beer cozies lie stacked upon the counter, and bedazzled cross jewelry swung like pendulums from the racks beside the door. It reminded me a lot of every place my family’s from. These odd little towns, eclipsed in time.

A friend of mine argues that it’s a farming community, and there is a higher percentage of immigrants, leading to more crime. But while the White Only population of McFarland is 77%, the Hispanic/Latino population comes in much lower, at 17.6% (pulled from FBI/US Census stats). And yet, 21 of the last 22 arrests have been Hispanic, or, at least, had Hispanic names (note that I am speculating here). So either the Hispanics are all criminals, or the cops are all racist, or the whole town is just fucked up. There’s not an overwhelming amount of data or statistics posted online, and trust me, I’ve done my research.

But know that McFarland doesn’t even come close to the top ten worst cities in California. I’m not even certain it makes the top 100. I’m not picking on this place as much as I am picking on the rest of us. We’re so damned concerned with International Relations and Global Issues and yet, how many of you have even heard of McFarland? Their average crime rates exceed the national average, and yet, no one is talking about it. I can barely find an online newspaper. One blogger has posted about this place. You can read his story—a little rose garden planted by a third grade class for an 8-year-old boy who died of cancer. I continued my search. The best I got was the Facebook Page for their local PD, upon which an article was posted regarding a recent shooting, four since January of this year. “Start carrying,” one local commenter writes.

We have this idea in our heads that crime happens in big cities. That overpopulation breeds criminals and poverty encourages dishonest lifestyles. But there are a thousand McFarlands stretched out across the United States. So what the fuck are we going to do about it? When are we going to start talking about these little one-stop, flyover, paper towns? When are we going to remember what it means to stand united, as our namesake states? What will it take? A story juicy enough to make the nighttime news in a town two hours away? Will we wait that long?

Small towns don’t mean small people. Stop blinking. Open your eyes. Drive on by and let it sink in.   America has a problem. We forget too often, and don’t remember nearly as much as we should. How the hell are we going to fix anything, if we can’t first fix ourselves?

12 thoughts on “One Rose in a One-Stop Town”

“I now walk into the wild.”
…Jon Krakauer