The party was in full swing. Indentured servants did their best to placate the unruly guests, refilling the carafes of thick, mulled wine, pouring the bourbon that glistened in the crystal glasses like casts of amber in the sunlight. The French Doors were open to the patio, letting in the warm Savannah air that clung to the pooling ponds of sweat that graced the little grooves behind the ears, where the hair was damp and matted in a fierce display of humidity. Air so thick you could cut it with the fine, silver bread knives that rested gently against the lips of gilded China plates.

The fireflies swarmed, their glowing forms dancing like the shooting stars streaking through the night, erratic patterns of chaos, like the whispering flumes of smoke that blossomed from the roof. And as the smoke took form, it’s monstrous figure lurching out, the guests began to cough. The night grew warmer, the fierce flames licking at the heavy, patterned fabric of the drapes that lined the windows, devouring the perfect, wooden feet of the upholstered French chaise lounge, igniting the varnish coating of the floors that clung like water to the slickered decks of ships.

And one by one, the servants and the guests carried the tables and the chairs, the seasoned roasts on silver platters, the fine china and the crystal glasses, they carried it all outside to the garden where they sat and dined by the light of the roaring fire that consumed the house.

And the host stood up from the head of the table, raised his glass before him, composed and calm and unruffled. With a draw back of his arm, he let loose the flying crystal, which spun through the air, chased by a stream of crimson wine. And with the shattering of the glass against the nearest oak, the party cheered, and the men and women, clothed in the finely draped fabrics of the era, let loose their cutlery and their dishes in a sheer display of animalistic frenzy.

On dark, foggy nights, you can still hear the clinking of champagne glasses and the tinkling of merry laughter. You can hear the flames crackle as they engorge themselves, feasting upon the ancient sideboards of the old plantation home. You can still hear the shattering of crystal, the demolition of fine china as it finds its final resting place upon the earth.

In this old cemetery, where the party never dies, but continues on into eternal bliss, all is uninhibited by time and space and rules of superstition. Bring along a glass of champagne; drink to the spirits all around you; let loose within the confines of the piercing iron fences and let your feet dance upon the graves. For though this may be a place for death, nothing here is dead. And though this may be a place of rest, in Savannah, rest never comes to the wicked.

37 thoughts on “Ain’t No Rest for the Wicked” 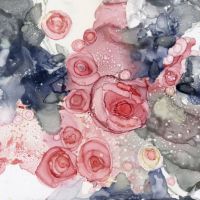