I’m in India.  I guess I could just start there.  Sitting on the balcony patio of my boyfriend’s uncle’s porch, surrounded by lush palms, tropical flowers, and Queen of the Night blossoms, who’s nightly scent still lingers sweetly in the morning air.  Mooti has brought me coffee (getting used to servants is quite an unusual experience) and I’m here digesting my excessively large breakfast because uncle says I haven’t eaten quite enough.  Idly (little moon shaped rice patties), Guava fruit, Masala Dosa (similar to a pancake, wrapped in onions and spices), Coconut Chutney, Papadum, Pomegranate, and a lentil rice stew who’s twenty letter name I’ll never begin to remember. 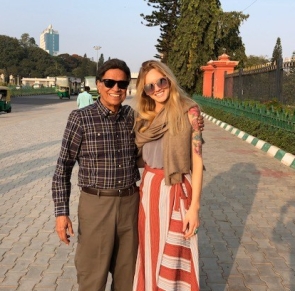 (Adam’s Uncle and myself)

This is a calm moment, though.  They’re not all like this, certainly, because the population of this country stretches far beyond any you have seen.  Yesterday, we went to Mysore (now called Mysuru, as India is trying to reclaim its national pride and take back the names of their cities).  Uncle put us on the 6:30 AM bus that didn’t leave until 7 because India works on its own system of time.  The drive was an experience in and of itself.  You pass by palaces nestled in amongst the slums, massive crowds of people sorting through the fabrics, the vibrant silks and tapestries.  You pass by children waiting for the bus, their newly pressed uniforms a stark contrast to the shanty-looking towns behind them.  It’s sad—but promising.

(Adam and myself at the temples)

I didn’t cry though.  My boyfriend said I would—but I hadn’t yet.  I hadn’t until the bus took its first stop.  We sat along a concrete bench and watched the street dogs (the population of which matches the people) run up and down along the road.  They all look alike—years of cross breeding has created a standard dog that looks almost like a dingo, with pointed ears, sleek bodies, and slim tails.  One ran by with a limp, it’s paw broken at the end, struggling to keep up with the rest.  That was it.  That did me in.  It wasn’t the dog exactly, as much as it was the realization that I am from a country with infrastructure that protects the people.  Despite the political issues we have in the United States, our government is primarily there to protect us, to better us, and to enrich our lives.

But in India, the garbage gathers in the riverbeds and medians of highways.  Sometimes it is burning in small piles beside the road.  There are no garbage trucks.  There is no system of trash collection.  When we wanted to leave a palace, the guard told us to walk the long way round.  When we asked if we could leave from the front, he held out his palm for Rupees, asking for a bribe.  There aren’t street cleaners to clean the roads.  You pay someone a quarter to come along with a hand tied broom and sweep it for you, but that is only if you can afford to do so.  There are no jobs, because there are no public works, but only private industries.  And so people stand around in large groups, which is begging for trouble.  The government could establish a public works, to employ the thousands of people to do the thousands of jobs that need doing, but that requires funding.  And so, the streets are left unpaved, the waters left polluted, and the roads left gathering stray bits of trash.

I spoke with a lot of Westerners before I left.  People who said that I would love the energy here—that it is so peaceful and enlightening and the Hindu religion just creates a zen that is illuminating.  But I think they were hitting the green stuff a little too hard.  Maybe a little too much yoga, and not enough looking around.  Because while India is stunningly beautiful, with the sarees and the vivid colors and the wandering cows painted in holy powder, it is also immensely sad.  I think they dress it up with color to make it seem less so, but that doesn’t mean that I don’t see the sadness in it all.  I am looking so very forward to the rest of this adventure.  But I will not delude myself into thinking that the beauty of vibrant temples and lush jungles can overwrite the faces of the hungry children.  Immersing yourself into culture means all of it.  And while I was, at the first, caught a little off guard—I am excited for what the next days will bring me. 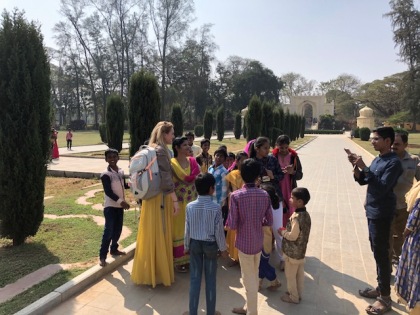 As I left one temple, some children ran up to me for a photo.  One little girl, bright face blossoming, reached out, grabbed onto my hands, and held them up in prayer.  “I’m going to teach you a Kerala word,” she said, proudly, bravely, with a darling little smile.  “Namaskaram,” she said, and bowed her head, before running off giggling to join the rest. 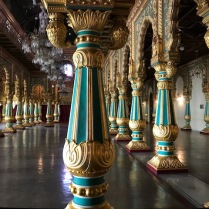 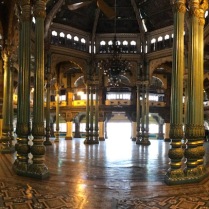 (The Temple at Mysuru) 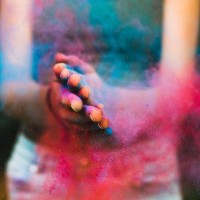